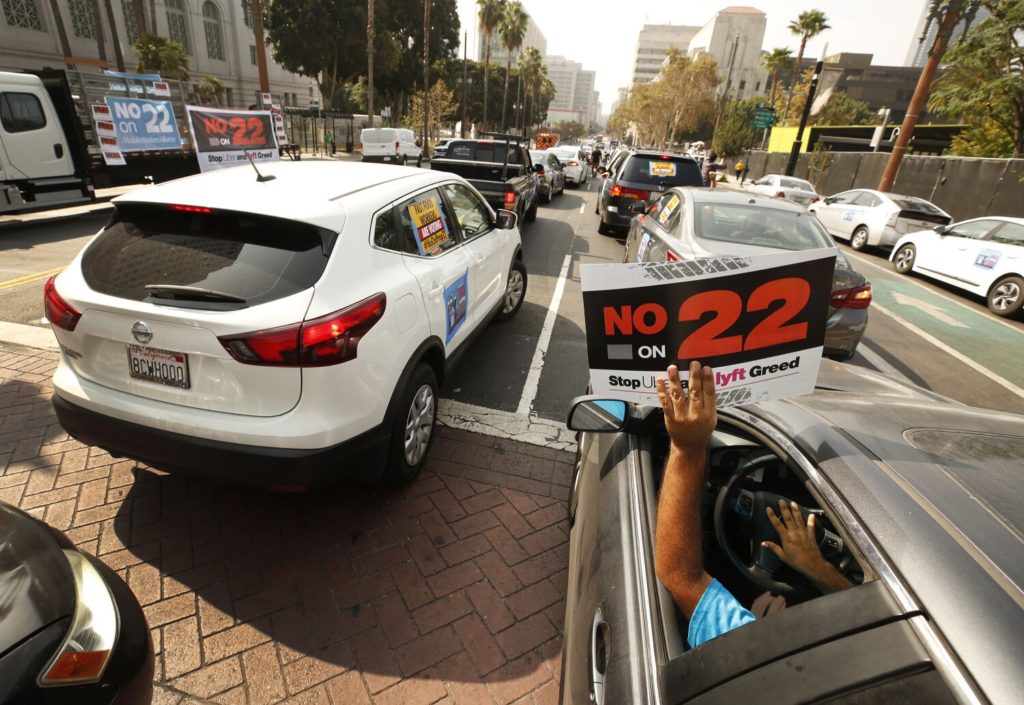 For more than a year, the California voter-approved gig economy law known as Proposition 22 has hung in the balance after a judge invalidated the ballot initiative allowing giant ride-hailing and delivery companies to classify their workers as independent contractors rather than employees.

On Tuesday, a California appeals court heard oral arguments in San Francisco on whether it should uphold the lower court ruling that deemed Proposition 22 unconstitutional and unenforceable.

Members of the three-judge panel expressed doubts about the legality of the 2020 ballot measure but also about the validity of the ruling, which experts described as a surprising rebuff of the aggressive effort by gig companies to rewrite the rules of work. California judges are usually reluctant to strike down voter-approved measures.

Industry proponents of the measure had previously derided the lower court ruling in paid advertisements as the concoction of an “activist judge” who ignored the will of voters.

At stake is the business model of Uber, Lyft, DoorDash, Instacart and other app-based companies, which spent more than $200 million pushing Proposition 22 as a way to protect people who choose to work as independent contractors. The measure was approved by nearly 60% of voters in November 2020.

For hundreds of thousands of drivers, Proposition 22preserved the flexible schedules associated with remaining an independent contractor but took away protections granted by a 2019 law, AB 5, requiring gig workers across many industries to be classified as employees with stronger benefits such as a minimum wage, overtime and workers’ compensation in case of injury.

The lower court’s ruling, made by Alameda County Superior Court Judge Frank Roesch in August 2021, found the law conflicts with the state Constitution by restricting the Legislature’s ability to regulate workers’ compensation rules. The ruling also argues that Proposition 22 violates a constitutional provision requiring initiatives to be limited to a “single subject.”

Roesch wrote that although the law claims to protect gig workers, it also “obliquely and indirectly” prevents them from bargaining collectively and thus “appears only to protect the economic interests of the network companies in having a divided, un-unionized workforce.”

Justice Tracie L. Brown during the hearing questioned the provision in the law limiting legislative amendments on collective bargaining as outside the scope of Proposition 22’s stated purpose, and floated the hypothetical idea of striking down the one provision rather than the whole law.

California election law professors, in a friend-of-the-court brief filed ahead of the 1st District Court of Appeal hearing, made a similar point, describing the provision as “unprecedented in the history of California initiatives,” and said it would “work mischief” and “allow a bait and switch in which voters pass an initiative on Subject A but the fine print will unconstitutionally prevent or limit the Legislature’s ability to legislate on Subject B.”

Jeffrey L. Fisher, an attorney defending Proposition 22 on behalf of a coalition of gig companies, argued that the singular purpose of the law “is very clear” and at its core defines gig drivers’ “relationship to companies with which they work.”

Justice Jon B. Streeter characterized Proposition 22 as a threat to legislative power.

“To remove a vast number of workers from the workers’ compensation system seems to me to be not just an alteration but a de facto dismantling of a huge portion of the benefits that in the Constitution the Legislature is charged with providing,” he said.

At times, however, Streeter also leaned toward deference tothe power of voters and appeared skeptical of the idea that allowing voters to make changes to workers’ compensation infringes on the state Legislature’s authority. He also said the single-subject rule is flawed because it is so subjective and up to interpretation.

The gig company coalition, called Protect App-based Drivers & Services, at a video news conference on Monday ahead of the hearing, urged the appeals court to overturn the decision.

California courts have repeatedly underscored a mandate to “jealously guard voters’ initiative powers and uphold their acts wherever possible,” said Kurt Oneto, an attorney with Nielsen Merksamer, a firm representing the coalition. Oneto at the video news conference described the legal challenge to Proposition 22 as a broader “attack on voters’ direct democracy powers.”

Deputy Atty. Gen. Jose Zelidon-Zepeda, a representative of the state charged with defending Proposition 22, reiterated this point at the hearing, describing the “liberal standard” California courts have adopted regarding voters’ authority.

At the closing of oral arguments, Justice Stuart R. Pollak alluded to sweeping implications of Proposition 22, remarking that “the court is certainly aware of the significance of this case.”

The case is expected to eventually make its way to the California Supreme Court.

The makeup of the California Supreme Court, however, has shifted in recent years. Of the seven justices, only one — Carol A. Corrigan — was nominated by a Republican governor. Proposition 22 could be the first highly contested ballot initiative to test the court, he said.

The ultimate decision on Proposition 22 will have a broad effect not only in California but across the U.S., as the gig company coalition behind the successful initiative looks to legalize its business model in other states, said Stacey Leyton, an attorney with Altshuler Berzon, the firm representing plaintiffs Service Employees International Union and several drivers who filed the original complaint against the proposition.

“Our hope is that in striking down Proposition 22, companies will not try to run another initiative,” Leyton said. “People have become more and more aware of how workers are misclassified.”

Gig workers with labor advocacy group Rideshare Drivers United rallied outside the Earl Warren Building in San Francisco on Tuesday morning during the hearing. A rally was planned simultaneously outside a state appeals court in Los Angeles.

Ceola Luna, 43, a driver who attended the Los Angeles rally, said she didn’t understand the wording of Proposition 22 when it was on the ballot but “saw the reality of it” reflected in depressed earnings after it passed.

“I feel like if we don’t do something as drivers to speak out against the pay we’re receiving that it’s just going to keep going lower,” she said.

The Proposition 22 discussion comes amid a push by the Biden administration at the federal Department of Labor to tighten rules on worker classification that if adopted would rescind a Trump-era rule that made it easier for businesses to classify their workers as independent contractors rather than employees. However, the proposed rule applies chiefly to the federal Fair Labor Standards Act and largely would not affect treatment of workers in California or Proposition 22.

The appellate court is required to issue its decision within 90 days, though attorneys involved in the case said they anticipate it being released much sooner.

Proposition 22 has remained in effect thus far through the appeals process. Major gig companies — Uber and Lyft, among others — have repeatedly declined to comply with mandates to reclassify their workers as employees.