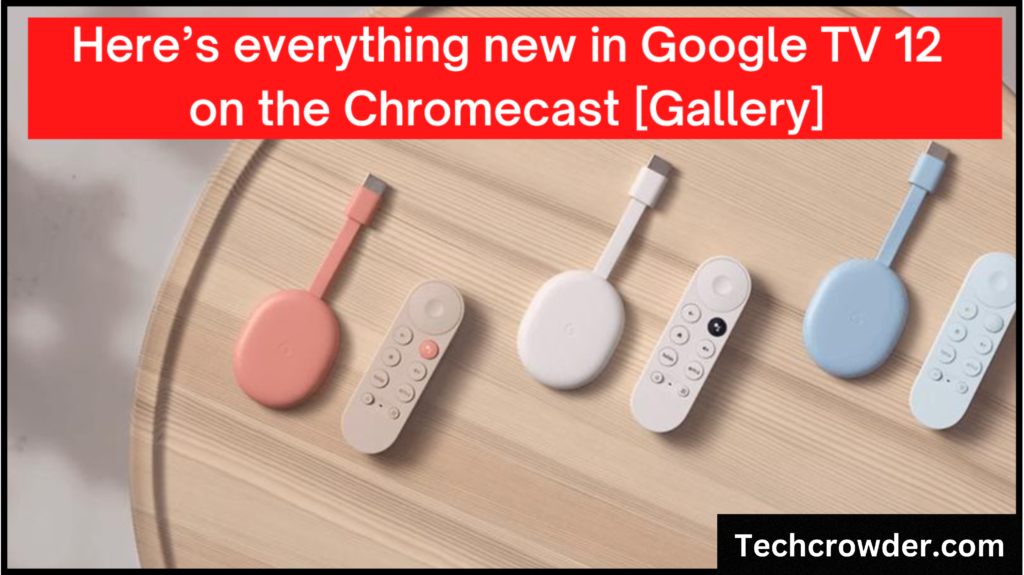 According to 9to5Google, the latest update for the Chromecast with Google TV brings build number QTS1. 220504.008. The software is still based on Android 10 and updates the October 2021 security patch to May 2022.

Your favorite streaming apps in one, easy-to-browse experience. From Disney+ to YouTube TV it’s easier than ever to discover what to watch.

Add movies and shows from your TV, mobile app or Google Search by clicking the watchlist icon. Ready to watch when you are.

Also read this : How to Get iPhone type Dynamic Island on Android

The folks at 9to5Google got confirmation from Google, stating that it will bring an update to the device sometime in the near future. Unfortunately, Google did not give an exact timeline of when this update would arrive.

Since its release, the Chromecast with Google TV hasn’t received that much attention. Don’t get the wrong idea here, the device was never been abandoned, but the updates delivered so far have been rather lackluster.

In its most recent update in July, the software update delivered fixes for apps that were having issues with 4K HDR and DRM video playback.

It also packs in performance improvements and bug fixes. For the most part, the older model has only received minor updates, security patches, and bug fixes.

Now, it appears that Google will also be updating its older Chromecast with Google TV unit. While the company didn’t have an official announcement, it did go on record to state that it will update the two-year-old model giving it new life with Android 12.

You’ll also find a new network setting in Google TV 12 on Chromecast called “Quick Connect.” As Google confirmed to us last year, this is designed to make it easier to connect your Android TV device (in this case, a Chromecast) to Wi-Fi from your smartphone.

Although the Android 12 update will be appreciated, for the most part, it probably won’t offer a whole lot for the Chromecast with Google TV. Users can expect support for a higher resolution menu UI, added privacy features, and other small changes.

If you’re ready to move on to something new, it might be worth checking out our guide on the best Android TV boxes and sticks you can buy in 2022.

So that’s everything new in Android 12 for the Chromecast with Google TV, but when will the update be coming to the 4K model?

Right now, there’s no confirmed timeline for when Chromecast with Google TV (4K) will get its Android 12 update, but it should arrive in the not-too-distant future via a traditional OTA upgrade.

That’s Android 12, though, and smartphones are now getting Android 13. When will that update come to Google TV? What’s new? A lot of that remains to be seen. Early hands-on time with Android TV 13 revealed there’s not much new, and Google has yet to release the final version of the update as of late-September 2022.

TikTok is installed during setup

This change is very likely exclusive to the Chromecast with Google TV (HD), but we found that TikTok was one of Google’s included apps on the device. It’s installed as a part of the setup, though you can stop it from being installed during setup.

Let us know in the comments if we helped you . Also please don’t forget to subscribe to our newsletter for more awesome buying guides and top buying lists.

Also read this : The Samsung Galaxy Tab S8 should be improved with new Android 12L update

Also read this : How to Turn off Auto Suggest Password on iPhone