Google Pixel 7 Pro Vs Samsung Galaxy S22 Ultra – Which Is The Best? 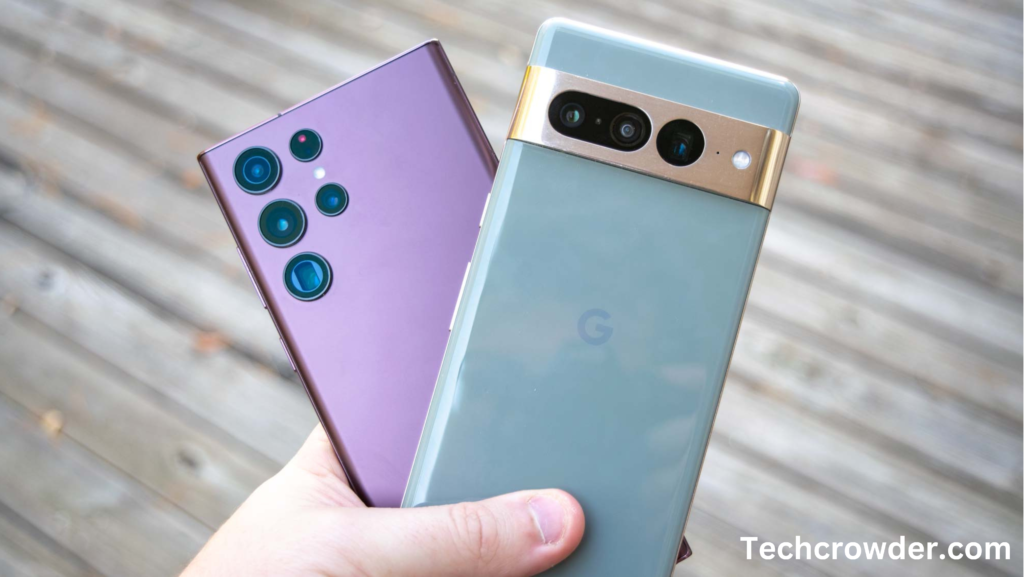 Google and Samsung make one of the best smartphones on the market. Both companies offer the most advanced feature that makes the most of their hardware and software integration in smartphones. Now, it is time for a comparison of the high-end Android smartphone: Which flagship phone, the Google Pixel 7 Pro vs the Samsung Galaxy S22 Ultra, is the best out there for capturing the contents of your wallet, check out all the details in this article below.

If you cannot decide which smartphone to buy between Google Pixel 7 Pro vs Samsung Galaxy S22 Ultra, do not worry, as we have got you covered. In this article, you will find out the comparison chart between these two smartphone models, from Design to Display to Price, as well as their Performance, Specs, and other information to help you out in the buying decision.

You can get both smartphones of Samsung Galaxy S22 Ultra and Google Pixel 7 Pro all over the world. Check out the price of these smartphones in US dollars below:

The Google Pixel 7 Pro and Galaxy S22 Ultra have very different designs. The Pixel 7 Pro is quite classic, except for its large bar that crosses its back shell and accommodates its photo cameras. On the other hand, the Galaxy S22 Ultra embraces the design of the late Galaxy Note range, fully integrating a stylus into its body. But this first round must go to one of the competitors, and it is the Samsung Galaxy S22 Ultra.

If there is one point where the Pixel 7 Pro everyone agrees, it’s performance. The two manufacturers integrate their own chips in their smartphones, and it is that of Google which delivers the best results. The Tensor G2 is particularly very strong in-game (125 fps on average). A score 4 times higher than that of the S22 Ultra. Needless to say, if you’re looking for a smartphone for gaming, the Pixel 7 Pro is a must.

The reputation of Google’s Pixels is well established when it comes to photography, as it has a 50-megapixel main module coupled with a 12-megapixel ultra-wide-angle lens and a 48-megapixel 5x telephoto lens. Opposite, Galaxy S22 Ultra offers the main module of 108 megapixels, an ultra wide-angle of 12 megapixels, and two telephoto lenses of 10 megapixels. One allows 3x optical zoom while the other is 10x. The Pixel 7 Pro offers much better shots. Day and night, it has a slightly more pronounced sharpness and more natural color management – ​​even if sometimes a little forced.

If the Google Pixel 7 Pro does better than its predecessor, it is unfortunately still not good enough in the high-end smartphone market in terms of autonomy. With only 15 hours and 53 min battery life, the latest smartphone from Google is therefore beaten by the S22 Ultra from Samsung. The Korean smartphone has autonomy for 17 hours and 27 min.

Which is the Best: Pixel 7 Pro or Galaxy S22 Ultra?

Both the Samsung Galaxy S22 Ultra and Google Pixel 7 Pro are no doubt two excellent high-end smartphones. As it stands out, both phones are very efficient and outstandingly hold their rank. But Google’s phone manages to deliver a slightly smoother copy than the S22 Ultra which only does so by a small length in terms of price, performance, and camera.

That is all you need to know about which is the best smartphone among Google Pixel 7 Pro and Samsung Galaxy S22 Ultra.

Also read this : How to Turn off Auto Suggest Password on iPhone

Also read this : Here’s everything new in Google TV 12 on the Chromecast